Concentrated flavors of raspberry and black licorice with a velvety texture. 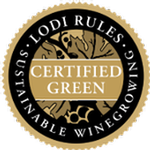 Our 2014 vintage’s fruit was gently guided through fermentation, allowing natural winemaking to highlight the true expression of the 116 year-old vineyard. Rich aromas and flavors of blackberry and raspberry meld with notes of complex spice undertones, which are intrinsic to the Zinfandel varietal. The low yields in the vineyard preserved the vibrant natural acidity and balanced the tannins through to the finish.

After a cold snap in December 2013, the 2014 growing season transitioned to a mild winter and spring. With the current drought conditions we welcomed the late February and early March rains that were well-timed and kept the vines growing. Consistent sunny weather from mid-March on led to early bud break in the vineyards as temperatures rose. A few weeks
of warm weather in the late summer months allowed the winegrapes to ripen early, making 2014 one of the earliest harvests on record. On the vine, most varietals had loose clusters that resulted in even veraison, bringing about uniform ripening which is necessary for winegrapes to develop great flavors and color. With average yields and great quality, the
2014 season produced another unique vintage.